I started making my own rake tasks recently to help with specific repetitive tasks that I need to do while working on projects.

Rake is a project of Jim Weinrich; check out his rationale for making rake here.

My favorite part is his explanation of why it is called rake. No, it has nothing to do with garden tools. It was supposed to be a portmanteau of ‘ruby’ and ‘make’ (since Rake was inspired by Makefile). Hence, rake.

rake -T will give you a list of rake tasks available for a given project.

This is what it looks like for a standard octopress directory: 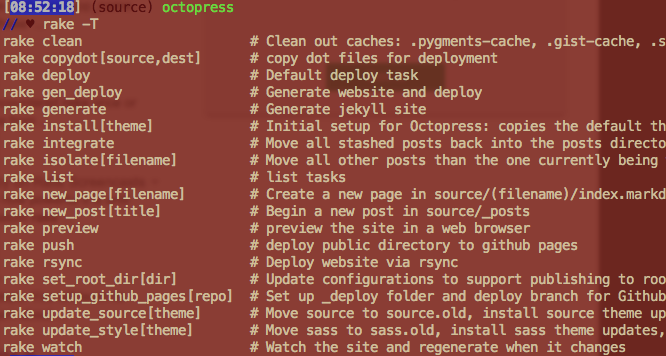 So if I forget that my normal routine is rake generate followed by rake preview, I can see it listed above.

I was working with the erd gem, which uses Graphviz to visualize complex database relationships in rails. If you want to understand what exactly is happening in your schema, it’s the gem for you.

I haven’t used it in a bit, so I googled it, and this tutorial popped up.

It had a suggestion to make a simple rake task to run the erd command with specific attributes to get just the type of a diagram you want:

The idea there is have a task that runs erd --inheritance --filetype=dot --direct --attributes=foreign_keys,content. The system then generates a .dot file, which is when converted into a .png file, with the rationale being that Graphviz has issues generating files that are not .dot.

You can just put it in a rake file, or run rails g task erd generate_erd. It adds a erd.rake file to lib/tasks (or you can add one manually and just type your code instead of using a generator).

To use that task, you type rake erd:generate_erd in your Terminal.

I ended up using these rake tasks to demonstrate the idea behind using namespace. They generate a png file as per an example above and a default pdf one:

And running these tasks in Terminal:

And you are done! Two file types of database schema charts have been generated:

NB: if all you wanted was to simplify running one long command (such as the aforementioned erd --inheritance --filetype=dot --direct --attributes=foreign_keys,content), you could just create a shell alias that you could then use across all your projects if they have erd installed.