Variables in Ruby and Their Scope:

There are four major kinds of variables in Ruby, like in most object-oriented languages:

There are also special variables such as self or nil, and of course, one can classify constants as a kind of a variable.

In this post, I want to talk about global variables, which, as the name implies, are stored globally and have global implications.

All variables in Ruby outside of locals ones are indicated with a sigil (a prefix that denotes variable scope): @ for instance variables, @@ for class variables, and $ for global variables.

Since Ruby is a dynamically typed language, interpreter will determine data type of each and every variable when it is being assigned; there is no need to define each variable’s data type when introducing it (so no need to type keyword global like in PHP).

If you specify a global variable, but not initialize it, it will return a nil pseudo-variable:

The Problem with Using Global variables:

Global variables are incredibly easy to use (I see sooo many games of Tic Tac Toe with global variables written by Ruby beginners), but also quite easy to abuse as they cane be accessed from within anywhere in your code even though the code refers to two separate classes: 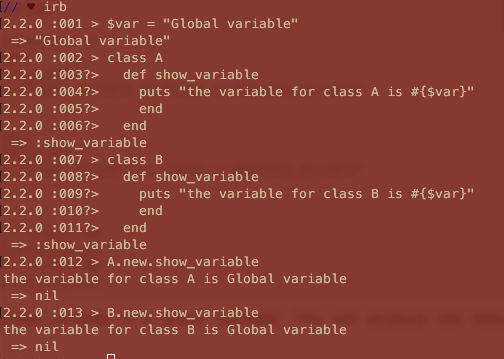 Global variables violate the principle of encapsulation) by allowing one part of your code to modify another part of your code without an explicitly defined interface. Over-using them probably means that app was not thoroughly thought out.

When to Use Global variables: Pre-defined Global Variables

Even though global variables are generally considered to be un-Ruby-esque, Ruby does include a number of useful global variables (largely a Perl legacy) with a $ followed by a single character or a word that have a pre-defined meaning.

Below is just a selection of those, see a full list in Ruby docs or by running $global_variables:

Constants are an opposite of variables, but since Ruby has a number of global constants, I thought it would be good to briefly mention them as well.

The most commonly used global constants are ENV and ARGV.

Check out this RosettaCode screenshot example for the classic 99 Bottles of Beer coding exercise:

The docs say this re: trace_var:

This is the example that the Docs use:

As you can see, one can pass a symbol that names a variable and a block of code or a string to the method. When the value of the variable changes, the block of code will evaluated or the string will be invoked (see more in The Ruby Programming Language, 2008, p. 280)

And this is exactly how the 99 Bottles of Beer example works!

To stop tracing the variable, use untrace_var just like Ruby docs above specified.